Amnesty For (Some) Russian Activists 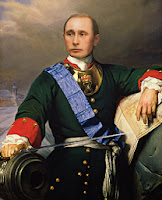 Russian Czar President Vladimir Putin granted amnesty to former oil tycoon and political rival Mikhail Khodorkovsky and to Nadezhda Tolokonnikova and Maria Alyokhina of Pussy Riot, in moves generally interpreted as "please to get off my case about human rights violations prior to the Sochi Winter Olympics."  Khodorkovsky has already pledged to stay involved in human rights issues in Russia and, as for the two Pussy Rioters:


Pussy Riot member Nadezhda Tolokonnikova was freed from prison on Monday under an amnesty that allowed for her early release from a two-year sentence for a protest in a church against President Vladimir Putin.

Tolokonnikova shouted "Russia without Putin" after she was freed from a prison in the Siberian city of Krasnoyarsk. Bandmate Maria Alyokhina was released from a different jail hours earlier and dismissed the amnesty as a propaganda stunt.

Meanwhile, on-going repression of environmental activists and recently-passed homophobic laws make it clear that, as Ms. Alyokhina noted, the amnesty for the "star" prisoners was a propaganda stunt - and a futile, ham-fisted one at that.
Posted by W. Hackwhacker at 10:31 AM