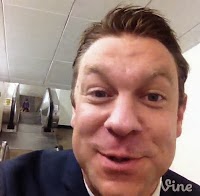 Florida Teapublican Congressman and cocaine aficionado Trey "Snow Nose" Radel, who was arrested last October on cocaine possession charges in Washington, D.C., is resigning from Congress effective later today.   Snow Nose spent six weeks in rehab, and vowed to continue in Congress, despite calls from his own party to step aside.  Snow Nose was an especially overt hypocrite on the matter of drug testing people receiving Federal assistance.

Now Snow Nose will be free to spend more time with his dealer family.