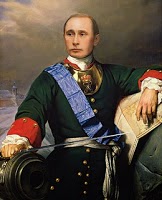 Russian autocrat Vladimir "Vlad the Invader" Putin signed a preliminary treaty making the Russian Federation's plan to annex Ukraine's Crimea closer to reality.  Putin defied U.S. and European Union threats to impose sanctions and to isolate Russia, delivering a hostile, nationalistic speech to Russian legislators and officials.  In his speech, he claims to have no further designs on Ukrainian territory, but as we've just seen, he used the imaginary "oppression" of ethnic Russians in Ukraine's territory as a pretext to invade.  He's exhibiting every sign of overcompensation for Russia's historic inferiority complex.

Perhaps he believes Russia's Sochi Olympics fanfare was the world's acquiescence to Russia's right to grab territory in its immediate neighborhood.  Perhaps he believes his oil and gas reserves, and the EU's dependence on them, will eventually convince the Europeans to cave to his plans for expansion.  Clearly, as German Chancellor Merkel indicated, he's not in touch with reality, particularly if he thinks he's going to reconstitute a Russian Empire.  Vice President Biden is in eastern Europe to consult with nervous allies and to signal support for the Ukrainian people and government.  That may not be enough at this point.

BONUS:  We came across this article from BBC, which reports that Russia tried unsuccessfully to enlist China during the U.S.'s financial crisis in 2008 to sell off Freddie Mac and Fannie Mae securities in order to deepen the financial crisis on Wall Street.  Surprised, given recent events?
Posted by Hackwhackers at 10:36 AM