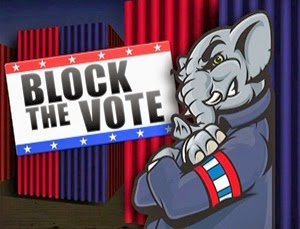 Republican governors in swing states Wisconsin and Ohio have recently signed legislation to suppress turnout by traditionally Democratic groups.  This follows efforts to introduce "voter id" laws similarly intended to suppress voting by the elderly, poor, minorities and students.  In Wisconsin and Ohio, both won twice by President Obama, here's the practical impact of those laws:


[March 27] Wisconsin Governor Scott Walker signed legislation eliminating early voting hours on weekends and nights, when it’s most convenient for many voters to go to the polls. When they took over state government in 2011, Wisconsin Republicans reduced the early voting period from three weeks to two weeks and only one weekend. Now they’ve eliminated weekend voting altogether.

Over 250,000 Wisconsinites voted early in 2012, one in twelve overall voters. Cutting early voting has a clear partisan purpose: those who voted early voted for Obama 58 to 41 percent in Wisconsin in 2012, compared to his 51 to 48 percent margin on Election Day. Extended early voting hours were particularly critical with respect to high voter turnout in big cities like Milwaukee and Madison. “It’s just sad when a political party has so lost faith in its ideas that it’s pouring all of its energy into election mechanics,” said Wisconsin GOP State Senator Dale Schultz, a critic of the legislation.

A month ago, Ohio passed legislation cutting early voting by a week, eliminating same-day voter registration and restricting the availability of absentee ballots while Secretary of State Jon Husted issued a directive doing away with early voting on weeknights and Sundays as well. 600,000 Ohioans, ten percent of the electorate, voted early in 2012. The cuts in Ohio, like Wisconsin, have a clear partisan and racial underpinning—in Cleveland, for example, African-Americans made up 56 percent of those who voted on weekends in 2008.  (our emphasis)

We're still living with the results of elections that have turned over Statehouses and legislatures to these anti-democratic forces, and thanks to Republican-engineering gerrymandering, will for some time to come.  Their ethos is pretty well summed up by Wisconsin Republican State Sen. Schultz, above (who passed up opportunities to switch parties years ago).  Their only focus in denying voting rights to millions of Americans?  We'll let BooMan play the hedgehog:


...maybe it's normal for a two-party system to develop in such a way that one party always benefits from higher turnout and one party always suffers. In such a system, the party that suffers will begin to doubt the worth of people's right to vote, since that right imperils their hold on power.  (our emphasis)

We know Democrats benefit from higher turnout, and Republicans fear it.  It should be clear by now to any sentient observer that's what's going on here.