Hearing Those Voices In His Head Again 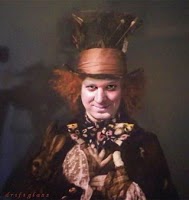 Certifiable loon and master of conspiracies Glenn "Dreck" Beck told a commencement audience last week at Jerry Falwell's ol' time religion school Liberty University that three years ago, while in Jerusalem, God spoke to him and said, "I am coming and I will settle scores."  No word on whether the largely Baptist audience interpreted that as a threat from Dreck, a Mormon, whose religion is considered a cult by many Baptists and other Christian demoninations.

Nonetheless, we're happy to see the Dreckster making the Crazytown rounds again.  The entertainment value is pure gold, which Dreck will also try to sell you.
Posted by Hackwhackers at 11:14 AM