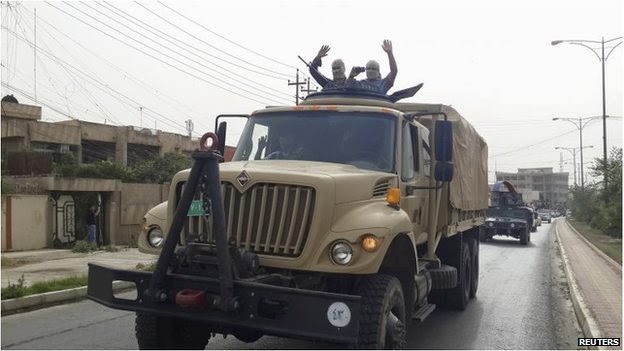 Eventually this had to happen in the failed state of Iraq.  Several thousand radical fighters belonging to ISIS, a violent offshoot of al-Qaeda, have seized Iraq's second largest city, Mosul, and are driving south toward Baghdad.  Iraq's leading Shiite cleric, Ayatollah Sistani, has called for all who are able to shoulder a weapon to join the disintegrating Iraqi Army, which has fled in the face of inferior forces.
Neocons, who wanted perpetual occupation if not war in Iraq, are cynically calling for a reintroduction of American military power, conveniently forgetting their central role in creating the false pretenses for invading Iraq years ago.  This is the broken pottery that they refuse to own.

Bitter loser Sen. John "McNasty" McCain stepped out of a national security briefing after only two minutes to rush to the microphones to blame the turn of events on the person that kicked his wrinkled ass in 2008.  How predictable, and how ill-informed.  McNasty said we should have kept a residual American force behind, something the government of Nouri al-Maliki refused to allow.  Now that al-Maliki is fighting for his life, the U.S. may decide to launch limited airstrikes or drone attacks to slow the advance of ISIS.  There are also reports that Iran has sent units of its elite Revolutionary Guard to join Maliki's forces against ISIS.  "The enemy of my enemy is my friend";  ironic that Iran would be allied with us, if we intervene.

The New York Times cuts through the Rethuglican posturing and says Maliki has to go:


"Why would the United States want to bail out a dangerous leader like Mr. Maliki, who is attempting to remain in power for a third term as prime minister? It is up to Iraq’s leaders to show leadership and name a new prime minister who will share power, make needed reforms and include all sectarian and ethnic groups, especially disenfranchised Sunnis, in the country’s political and economic life — if, indeed, it is not too late."

With the Iraqi Army refusing to fight for its own government, it's hard to see how any U.S. military action would have a long-term impact, despite what McNasty claims.  It would also be refreshing, albeit rare, for hacks like McNasty to show some remorse and humility over their responsibility for the original mess.  Don't hold your breath.
Posted by Hackwhackers at 10:47 AM