Dr. Ben Carson Gets His Nazi Analogies Sideways And Backwards 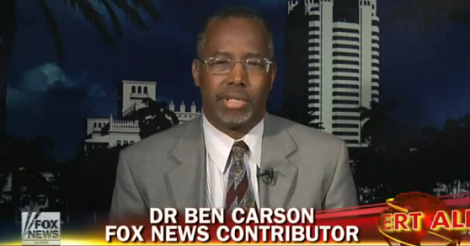 Here's Driftglass on remarks by Republican loon-du-jour Dr. Ben "On Meds?" Carson comparing the America of progressives and Obama supporters to Nazi Germany:


... I actually agree with what Dr. Carson said, although not in any way that would make him happy.

The despair and rage and paranoia of post-WWI Germany that made the rise of Nazism possible -- an overpowering sense of betrayal and lost greatness... an obsession with race and purity... a berserk hatred of impure outsiders and immigrants... a willingness to believe the most paranoid conspiracies about fifth columns and internal enemies ... the relentless scapegoating of (among others) minorities, foreigners, intellectuals, unions and Liberals ... the round-the-clock raving of demagogues -- are precisely the same toxic conditions which prevail within the Republican Party and the Conservative Movement today.

"Fox News Contributor" tells you all you need to know, too.
Posted by W. Hackwhacker at 11:55 AM