So Virginia's Not For Lovers After All? 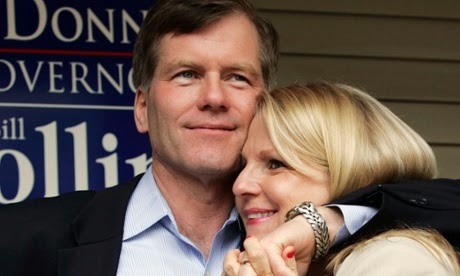 The corruption trial of former Virginia Governor Bob "Blowdry Bob" McDonnell now hinges on whether the coin-operated former Governor can convince the jury that he and his -- uh -- materialistic wife Maureen were not enough of a couple to conspire in separating health pill magnate Jonnie Williams from his money in exchange for government favors.  The defense has been suggesting for weeks that the McDonnells were in a "broken marriage" that precluded any conspiracy between them to extract loans, gifts, etc, from Williams.

When Blowdry Bob took the stand for the first time yesterday, he portrayed a frayed marriage and a spouse beyond control in an attempt to distance himself from the gifts and loans provided by Williams.  Blowdry Bob, who was once mentioned on a short list of Republican Presidential possibilities, noted that his wife spent more time on the phone with Williams than with him, all part of an effort to distance himself from the "pay-to-play" corruption charges against him.  We'll see how the strategy works, but the prosecution will be eager to explore Blowdry Bob's direct involvement with Williams, for example his $30,000 investment in Williams' company, the $15,000 given to him to cover his daughter's catering costs, and much more.

BONUS:  Here's a teaser from Eugene Robinson's op/ed this morning on the Guv:


How far would you go to stay out of jail? Would you publicly humiliate your wife of 38 years, portraying her as some kind of shrieking harridan? Would you put the innermost secrets of your marriage on display, inviting voyeurs to rummage at will?

For Robert McDonnell, the former Virginia governor on trial for alleged corruption, the answers appear to be: “As far as necessary,” “Hey, why not?” and “Sounds like a plan."