Face the Nation Celebrates 60 Years, Most of Them With John McCain 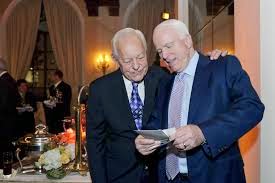 From today's "Reliable Source" feature in the once great Washington Post Bezos Bugle:


More than a dozen members of Congress, R’s and D’s alike, along with a who’s who of Washington TV news, turned up at a splashy fete Monday night to mark the Sunday show’s [Face the Nation's] 60th birthday. Sen. John McCain boasted to the crowd at the Newseum that he had been a guest 101 times.  (our emphasis)