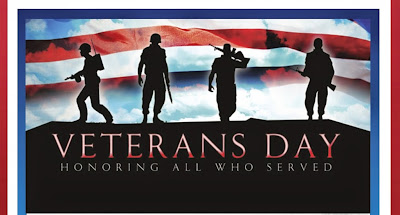 Let's start the day by saluting our Armed Forces veterans, whose service and sacrifice should be honored every day, but especially today.

On November 11, 1918 at 11 o'clock in the morning, the armistice between the Allies and Germany was signed, ending hostilities on Europe's Western Front in World War I. The time was significant: the 11th hour, of the 11th day, of the 11th month was meant to signal, after fighting the most horrific war up to that time, that humanity was literally in its 11th hour in confronting the threat of war to its survival. Called Armistice Day at first, in 1954 President Eisenhower proclaimed that the holiday should be a commemoration of all veterans and from then on, we've known it as Veterans Day.
Posted by W. Hackwhacker at 8:46 AM