Here's why, if you happen to pass by a Walmart soon, you may see people out picketing:


The nation's largest employer, Walmart employs 1.4 million people, or 10 percent of all retail workers, and pulls in $16 billion in annual profits. Its largest stockholders—Christy, Jim, Alice, and S. Robson Walton—are the nation's wealthiest family, collectively worth $145 billion. Yet the company is notorious for paying poverty wages and using part-time schedules to avoid offering workers benefits. Last year, a report commissioned by Congressional Democrats found that each Walmart store  costs taxpayers between 900,000 and $1.75 million per year because so many employees are forced to turn to government aid.  (our emphasis)

Not only are taxpayers picking up the bill for Walmart employees living under the poverty level, but their execrable penuriousness is causing some Walmart stores to set up food bins for employees to donate to other employees: 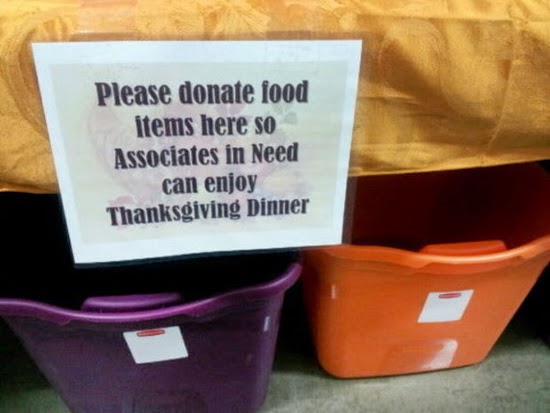 Those associates wouldn't be "in need" if Walmart paid a living wage and allowed full time employment with benefits like health insurance.   One wonders how the Waltons ("the nation's wealthiest family") can sleep at night.  Then again, we think we know the answer.
Posted by W. Hackwhacker at 11:53 AM