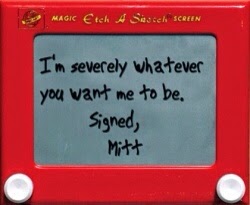 When narcissistic plutocrat Willard "Corporations Are People" Romney speaks these days, he wants you to believe he's now reborn as Willard 3.0, Champion of the Poor.  Just two years ago, he was caught on video disparaging "47%" of Americans that he views as moochers and "dependent on the Government." He claimed that minority and young voters wanted to reelect President Obama because he gave them "gifts," in the form of Government programs and tax breaks.  His 2012 running mate that he chose and embraced, Rep. Paul "Lyin'" Ryan, was responsible for proposing a budget that the U.S. Conference of Catholic Bishops denounced as failing the "moral test" of protecting the poor.

As we saw in 2012, Mittens was willing to dump on his record as a moderately conservative governor, and proclaim himself "severely conservative," running to the right of such reactionaries as Rick "Frothy Mix" Santorum and Newt "Poot" Gingrich.  An advisor of his compared Mittens' strategy to an Etch-A-Sketch toy, where he would win the nomination by appealing to the far-right mouth breathers in the base, and once he was nominated, reboot as an electable, moderate conservative.  In other words, Mittens would be whatever it took to win the nomination and the election, because as we know, it's all about Mittens and his messianic belief that he's entitled (dammit!) to be President, regardless of what the moochers voters keep telling him.
Posted by Hackwhackers at 11:07 AM

Labels: Mitt Romney tries to portray self as champion of the poor

Willard R-Money styles himself American Royalty. He's a The Dauphin of the Republican Aristocratic Kleptocracy, as the Son of a Governor and Presidential Candidate and then a life long college student, draft dodger, "hard working" consultant and now professional politician.

Romney has never done an honest days worth of work in his life opting instead to be a professional parasite, a bureaucrat through and through who has lived his life of leisure and largess at the expense of the American Taxpayer.

Fittingly as a Republican he is also a Chicken Hawk, bravely wanting to risk the lives of other men's sons while his sons sacrifice for America by trying to get him elected President. His perfect hair is greased with the oily drippings of his rank cowardice.

“In 1968, France was a dangerous place to be for a 21-year-old American but Mitt Romney was right in the middle of it.” — CNN, Romney Revealed.