Rand And Ron Paul: The Acorn And The Nut 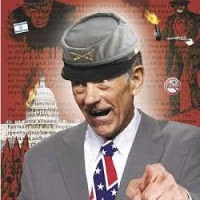 It's long been known that uber-libertarian Ron "Uncle Crazy" Paul, the tree from which Sen. "Ayn" Rand Paul (Dudebro-KY) fell (landing on his head) has some fringe ideas and associates, especially when it comes to "states rights", views that he's still more than happy to share with us:


“A lot of times people think secession, they paint it as an absolute negative,” said former representative Ron Paul (R-Tex.). After all, Paul said, the American Revolution was a kind of secession. “You mean we should have been obedient to the king forever? So it’s all in the way you look at it.”

That's the old coot speaking this past weekend at a "one-day seminar" on secession in Houston, TX.  It's also part of his worldview that, well,


“Sanity will not return to U.S. leaders until our financial system collapses..."

Yay, financial collapse!  Also, since when does Uncle Crazy get to talk about "sanity?"

All of which (and much more in Uncle Crazy's career) might be somewhat problematic for political scion and likely Republican presidential candidate "Ayn" Rand.  That's because "Ayn" Rand needs to broaden his support from his father's crackpot shock troops to a larger, though equally loony, Republican "mainstream:"


Rand, 52, is contemplating a presidential run — at its heart, an act of optimism. He is moderating some hard-line positions and introducing himself to donors and voters. [snip]

Rand Paul will need to broaden his appeal far beyond his father’s hard-core supporters if he hopes to win the GOP nomination his father never could. But some members of that core said he was losing them by adopting policies closer to the GOP mainstream.

That's why "Ayn" Rand was in Rancho Mirage (!!), California, this weekend at a cattle call luxe retreat sponsored by the paleo-right billionaire Koch brothers, hoping to pick up support from plutocrats who are hoping that they won't be flushing their ill-gotten wealth down the crapper like they did in 2012. We are assuming that having your dangerously eccentric daddy talking about secession and financial system collapse on the same weekend doesn't play well with the big money boys.  It has to make them wonder if the acorn is as much of a nut as its progenitor.