Nine members of several bike gangs were killed in a shootout in a "Twin Peaks" breastaurant (think "Hooters," but less classy) and parking lot in Waco, Texas on Sunday.  Nearly 200 people were arrested in the aftermath of the carnage.  These thugs good ol' boys had plenty of guns and ammo at their finger tips (over 100 1,000 weapons were seized at the scene).

While some bikers directly participating in the violence were cuffed, here's a photo of another group after the shootout:

Are you noticing anything...  odd?  Like maybe the biker on his cell phone, others hanging around like they were maybe getting a "time out" from the cops?  Oh, yeah.  They're all white.  They're also potential shooters or, minimally, witnesses to the shootout.  Charles Blow detects a teensy disparity between the treatment of Waco and these good ol' white boys and the "blahs" in Baltimore: 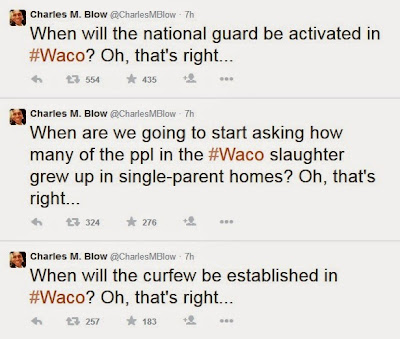 Wonkette wonders if the gun-fondlers in the National Gun Manufacturers Rifle Association will come up with a catchy new slogan defending the Second Amendment rights of the bikers to use their shootin' irons in such a way, and adds:

As of press time, we have not yet heard from Alex Jones on the matter, so we aren’t certain whether the bikers were all crisis actors pretending to have a shootout so the feds can seize all the guns, or if the incident is part of Operation Jade Helm 15, and hence a slightly different flavor of false flag incident staged so the feds can seize all the guns. The one thing it couldn’t possibly be was a bunch of armed thugs blowing each other away because guns are always the solution.

Because an armed society is a polite society!
Posted by W. Hackwhacker at 10:43 AM