After his stumbling over questions about his brother Dumbya's terrible domestic and foreign policy legacy and flip-flopping on previously held positions, House of Bush pretender-to-the-throne John Ellis "J.E.B." Bush can't seem to find his footing.  He's been putting on an act for the past few months that he's just testing the waters for a "possible" Presidential run in 2016, when it's been patently obvious with his fundraising and "policy" speeches that he's running.  Tomorrow's the day he formally announces, though, and he managed to step on his shoelaces with the premature release of his campaign logo: 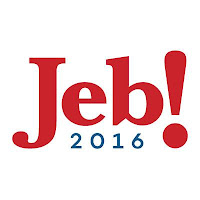 Now, what's missing in this logo?  That would be the name Bush, and J.E.B. can't seem to distance himself fast enough from the last name his brother severely tarnished (thanks, Dumbya!).  It's almost painful to watch J.E.B. (or is it J.E.B.! ?) think he's fooling anyone.  There was a saying attributed to the late Robert Kennedy that went, "Hang a lantern on your problems," in order to own up to them and to address them proactively.  What J.E.B. has done instead is to hang an exclamation point on them. 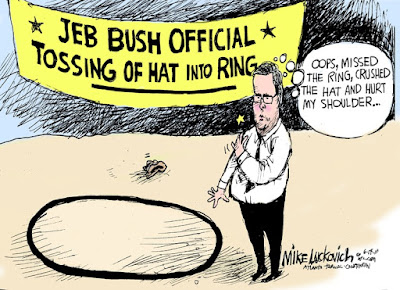 (Mike Luckovich, The Atlanta Journal-Constitution)
Posted by Hackwhackers at 1:39 PM