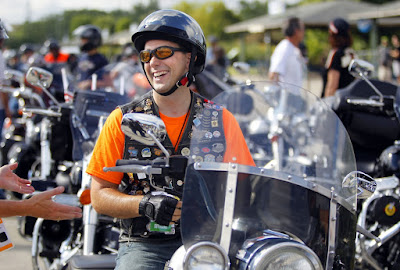 The major claim to fame (infamy?) Koch brothers employee of the year puppet Gov. Scott "Koch Head" Walker (R-Kochland) enjoys with fellow right-wing Republicans is his single-minded resolve to kill unions in Wisconsin (starting with public unions, in a "divide and conquer" strategy), because Democrats!  Well there's a certain shall we say hypocrisy involved with Koch Head's riding on and promoting Harley-Davidson motorcycles, a Milwaukee- based company:


"He's trying to make a name for himself by saying 'I took on 100,000 union workers' - and he's on our bikes," said Andy Voelzke, 57, who works at Harley's plant just outside Milwaukee and is a member of the United Steelworkers union. [snip]

Harley’s unions in Wisconsin could be affected by Walker's "right to work" reform passed this year. Voluntary membership could leave unions with less money to pay for negotiators and lawyers. The company will also have more power to fire employees for not agreeing to additional tasks, such as overtime shifts.

Koch Head is a hog ridin' fool, and a bold and brazen one at that.