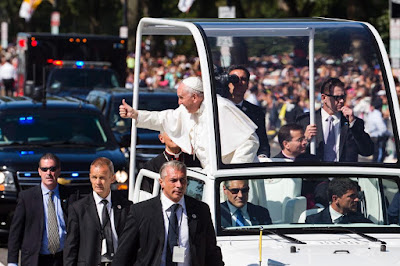 In his remarks at his welcoming ceremony at the White House today, Pope Francis made a strong appeal to the U.S. and world community to heed the signs of global climate change and to take steps to ensure that future generations had a sustainable future:


"Mr. President, I find it encouraging that you are proposing an initiative for reducing air pollution,” the pope said during his brief speech at the White House. “Accepting the urgency, it seems clear to me also that climate change is a problem which can no longer be left to a future generation. When it comes to the care of our common home, we are living at a critical moment of history."

Later, at St. Matthew's Cathedral, speaking to U.S. bishops, the Pope addressed immigration urging his bishops to continue their welcoming of immigrants, saying, "Do not be afraid to welcome them ... I am certain that, as so often in the past, these people will enrich America and its church."

Tomorrow, the Pope addresses a joint session of Congress whose Rethuglican majority is increasingly at odds with him over the issues of climate change, income inequality and immigration.  We'll see if his remarks are received with respect by the more reactionary members, who will see anything he says through their partisan lens.

UPDATE:  Wingnuts vent their anger at the Pope for differing from their political ideology.  Again, they see everything through their partisan lens…which pokes out of their belly buttons.

(photo: The Pope giving the "thumbs up" to crowds along Constitution Avenue in D.C.  J. Scalzo, European Pressphoto Agency)
Posted by Hackwhackers at 2:16 PM