In an interview yesterday with Bloomberg News, bloviating billionaire Donald "Rump" Trump noted that the 9-11 attack had occurred "during the reign" of Bush dynasty heir John Ellis "J.E.B.!" Bush's brother, Dumbya.  Factual statement, no argument there, right? (Well, Stephanie Ruhle, the moron interviewing him, interjected "you can't blame him for that!" but that's symptomatic of today's Republican-wired press).  Taking the bait, J.E.B.! went to his Twitter machine and gave us this flatfooted retort:

How pathetic for @realdonaldtrump to criticize the president for 9/11. We were attacked & my brother kept us safe.
— Jeb Bush (@JebBush) October 16, 2015


"We were attacked…" Well, yes, so brother Dumbya didn't really "keep us safe" did he? We were attacked after Dumbya and The Dick ignored intelligence warnings, particularly the one sounded by the CIA just 5 weeks before 9-11 in a briefing to Dumbya at his Crawford "ranch."  The August 6, 2001 "Bin Laden Determined To Strike in U.S."  presidential daily briefing memo outlined how the al Qaeda organization was planning to hijack commercial airliners and use them as virtual missiles against targets in the U.S. itself.  As the linked article notes, it's even worse than that:  earlier briefings to Dumbya and crew -- on May 1 and June 22 specifically -- sent the clear message that attacks on the homeland by al Qaeda were "imminent," so there were recurring warnings leading up to 9-11.

Dumbya "kept us safe?"  Except for those little incidents on 9-11, not to mention his reckless and unjustified war in Iraq which killed many thousands more.

No @JebBush, you’re pathetic for saying nothing happened during your brother’s term when the World Trade Center was attacked and came down.
— Donald J. Trump (@realDonaldTrump) October 17, 2015

BONUS II:  Recall that J.E.B.! -- with no sense of the cruel irony -- actually tweeted this picture of his brother standing atop 9-11 rubble with the message, "he kept us safe." Clown.  Tell that to the dead under the rubble. 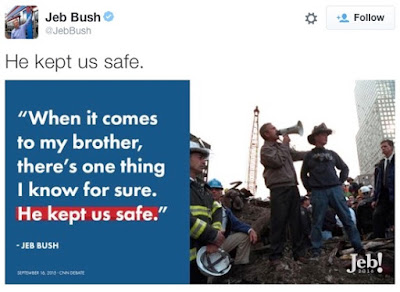 Posted by Hackwhackers at 8:44 AM