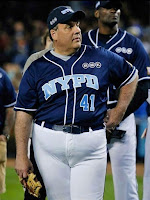 Man- who- will- never- be- President Gov. Chris "Krispykreme" Christie (R-NJ) is getting record low approval numbers in his home state.  It's no wonder why:


"It's just disappointing that a man, who is the governor of New Jersey, a man who wants to be president of the United States, would lower the discourse in a situation such as this," he added.  [snip]

Rosenello accused Christie of disrespecting first responders and the residents of his community, who saw major damage to their homes and businesses amid swells of water up to 10 feet tall.

"My biggest concern is the complete and utter disrespect that he has shown to the first responders, the fireman and police," the mayor said. "For him to just completely disrespect the efforts they've put forth this past weekend is unconscionable. And lastly, the residents, the business owners, who today are tearing walls out of their houses, tearing up carpets; their lives have been completely disrupted. And his lack of compassion is unbelievable. I've never seen anything like it, quite frankly, from an elected official."  (our emphasis)

Some city's disaster relief might be slow in coming, if you know what we mean and we think you do. "Compassion" is not a trait we would ever associate with Krispykreme.  Arrogance, bullying, hypocrisy, dishonesty, vindictiveness, yes;  never "compassion."

UPDATE:  If you've been affected by the flooding in New Jersey, you'd better have your own mop.

(Photo:  Covering first and second base and showing disrespect to the police (NYPD), too.  But, if you don't play ball with Chris Christie, well, he'll just take the ball home.)