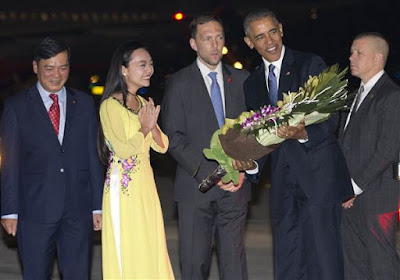 President Obama received a gift of flowers as he arrived yesterday in Hanoi, Vietnam, the first visit there by a U.S. President in a decade. Judging by her expression, Obama's appreciation of the flowers delighted official ceremonial flower presenter Linh Tran.

While in Hanoi, Obama announced a lifting of the U.S. embargo on lethal weapons that's been in effect since the Vietnam War, although he cautioned that the type of weapons would depend on Vietnam's progress in human rights. Talks will also take place on new trade initiatives and on dealing with China's increasingly ambitious territorial claims.

(photo: Carolyn Kaster, AP)
Posted by Hackwhackers at 9:46 AM