Water (sewage?) seeks its own level:


The self-aggrandizing “Pharma Bro” known for hiking up the price of an AIDS drug has thrown his political support behind a man with another giant ego: Donald Trump.

Martin Shkreli, the 33-year-old former CEO of Turing Pharmaceuticals, said on Twitter Thursday that he would vote for the presumptive Republican nominee in his likely general election matchup.

“I haven't been called by the Trump camp. I support him vs. Hillary,” he said, adding that the brash billionaire should pick an experienced vice presidential candidate.

Shkreli, who is currently awaiting trial for securities fraud, said later that “all you people who don't like trump are jealous, stupid and poor! don't make me laugh!”  (our emphasis)

By far the best snark we've seen in response to this coveted endorsement comes from Eric Levitz at NYMag:


We all know Martin Shkreli has his flaws. The former hedge-fund manager turned pharmaceutical CEO — turned exemplar of capitalism's worst pathologies — tried to make malaria treatment into a luxury good. And he bought that Wu-Tang album. And his last name is easy to misspell.

But this is America, a land of second chances. And on Thursday night, Shkreli took a first step on the path to redemption. Recognizing that his own unpopularity is the most powerful weapon he possesses, everyone's least favorite hedge-fund hipster delivered a devastating blow to Donald Trump's candidacy.

Someday our grandkids will ask what we did to prevent fascism from coming to America. Martin Shkreli will be able to say, simply, "I did what I could."

You remember him!?  He's this douche: 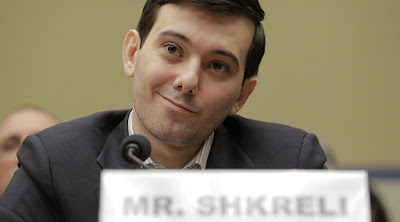