The Pedophile Protectors Are At It Again 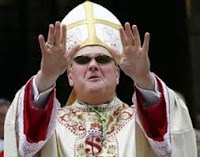 The Catholic Church's long-term problem with pedophile clerics is not news. Nor are the self-righteous statements by various Cardinals and Bishops that the mess is being addressed. In fairness, where former Popes John Paul II and Benedict were guilty of, at a minimum, failing to deal with the extent of the problem, Pope Francis has made nominal, symbolic efforts to reverse the damage.

Just when you think the Catholic Church is, what's the word, repenting for the depredations of some of its clergy, a story in the New York Daily News will convince you otherwise. And right at the heart of it is the self-promoting, glad handing, Republican- friendly Cardinal Timothy Dolan, who has his own checkered history of trying to sequester cemetery funds to pay potential claims when Archbishop of Milwaukee. The story notes the resources -- some $2 million - expended by the Dolan-led Catholic Conference to fight against state legislation in Albany that would make it easier for victims of sex abuse to seek justice. The Church is seeking statute of limitation protection, and is fighting a proposed one-year window in which victims could sue despite being beyond the current legal limitation.

Imagine the good that $2 million would have done if the Church applied the money to the needs of the community, rather than protecting itself from its past.
Posted by Hackwhackers at 1:38 PM

Oh I thought this was going to be about the House Republicans or Donald Trump lauding Joe Paterno?