The, Uh, Reasoning Of A Trump Supporter 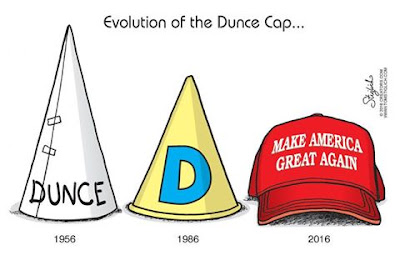 Can you follow the "reasoning" of neo- fascist Donald "Rump" Trump (a.k.a., Cheeto Jesus) supporter Amanda Feather, mother of six, from Greensboro, NC?  Neither can we:


“There are too many countries who demean their women that I think if we have a woman in office, it’s really going to hurt our country more than anything, because they have no respect for women,” Feather said as her two young daughters listened. “And then I think our attacks in our country and our issues in our country are going to become even greater, because those countries are not going to have that respect for us. And we’re already starting to lose it. And I don’t think we need a woman to make us lose it even more.”

If it were possible to clear her noggin of its feathers (heh), she might benefit from reading this.  Or not. Sic transit gloria, America.

I now see why you put reasoning in quotes.