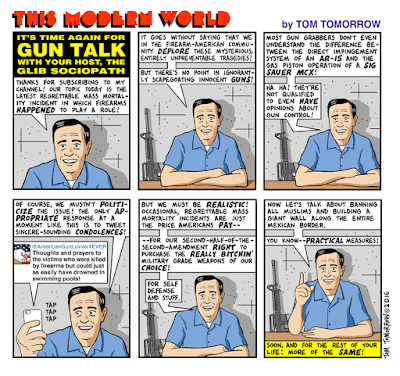 "Firearm Americans" is a new hyphenated term for one-issue voters, a group that exercises far more influence than their numbers. And the obsession with the "second-half-of-the-Second Amendment?" That's because the first half states, "A well regulated militia being necessary to the security of a free State," referencing State militias that evolved into the National Guard, an organization that the likes of the NRA's Wayne LaPierre, and shooters Omar Mateen, Adam Lanza, and James Holmes never belonged to.

(cartoon: Tom Tomorrow, via Daily Kos)
Posted by Hackwhackers at 11:18 AM