Day One At The Republican Hunger Games: Sad!

The New York Daily News cover says it all. 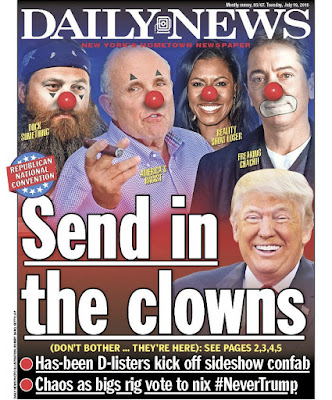 How bad was it?  Well, beyond Melania Trump's plagiarized speech, there's all this:


People inside the hall streamed for the exits as Lt. Gen. Michael Flynn droned on, and NBC wrapped up its hour, after some banter between its anchors, with a shot of a shockingly empty arena.

It was a rough end to a day that began with Trump’s campaign feuding with the popular Republican governor of Ohio, and that featured shouting and jostling on the convention floor as the party tried to stamp out the last embers of the Never Trump campaign. All day, cable news chyrons spoke of disunity and chaos.

On stage, there was a red-meat buffet of raw emotion for an angry Republican electorate, with little talk of ideology or policy. Indeed, there were more mentions of fallen American soldiers than of conservatism.

There's a lot more to read at the link and elsewhere, including hair- on- fire "oratory" making it sound like a Tea Party rally, Republican messages getting stepped on by (who else?) narcissist Donald "Rump" Trump, and the understandable exodus of delegates well before the end of the night.

As for one of the clowns pictured above, the despicable Rudy "Noun, Verb, 9-11" Giuliani, Charles Pierce had it right:


... Rudy Giuliani bellowed like a man in search of a balcony, or a man in search of a Thorazine the size of a manhole cover. This was the real stuff, the strong medicine that this crowd had gathered to hear. His national ambitions snuffed out in gales of laughter back in the day, Giuliani did everything Monday night except guarantee that the trains would run on time.

"There's no next election. This is it. There's no time left for us to revive our great country!"

And I beheld a pale horse's ass and the name that sat upon him was Death, and hell followed after him.