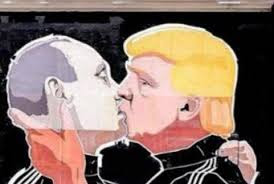 With the release of Russian- hacked Democratic National Committee files and a new attack angle from neo- fascist "Siberian candidate" Donald "Rump" Trump, Franklin Foer has an important read on the widespread connections between Rump and Russia, and the murky behind- the- scenes effort by the Russian government to boost Rump's fortunes. Here's a long excerpt, but the entire piece is worth reading:


We shouldn’t overstate Putin’s efforts, which will hardly determine the outcome of the election. Still, we should think of the Trump campaign as the moral equivalent of Henry Wallace’s communist-infiltrated campaign for president in 1948, albeit less sincere and idealistic than that. A foreign power that wishes ill upon the United States has attached itself to a major presidential campaign.  [snip]

Is Putin already meddling in this campaign? In his chilly way, he has signaled his rooting interest. He praised Trump as “very talented.” His mouthpieces are more effusive. Vladimir Yakunin, the former chairman of Russian Railways, has said of Trump, “He is addressing some internal failings of the American people.” The Kremlin doesn’t seem much bothered to disguise its help. Soon after the discovery of Russian intelligence hacking into Clinton servers, documents suddenly materialized on the web: a PDF of the DNC’s opposition research file and a trove of spreadsheets, including a list of donors to the Clinton Foundation. [snip]

In the end, we only have circumstantial evidence about the Russian efforts to shape this election—a series of disparate data points and a history of past interference in similar contests. But the pattern is troubling, and so is the premise. If Putin wanted to concoct the ideal candidate to serve his purposes, his laboratory creation would look like Donald Trump. The Republican nominee wants to shatter our military alliances in Europe; he cheers the destruction of the European Union; he favors ratcheting down tensions with Russia over Ukraine and Syria, both as a matter of foreign policy and in service of his own pecuniary interests. A Trump presidency would weaken Putin’s greatest geo-strategic competitor. By stoking racial hatred, Trump will shred the fabric of American society. He advertises his willingness to dismantle constitutional limits on executive power. In his desire to renegotiate debt payments, he would ruin the full faith and credit of the United States. One pro-Kremlin blogger summed up his government’s interest in this election with clarifying bluntness: “Trump will smash America as we know it, we’ve got nothing to lose.”  (our emphasis)

Josh Marshall also has done his homework and has a great read on the Rump - Putin connection.

This isn't yet getting the attention of the corporate media that it should, which is still trying to find ways to "normalize" Rump.  Here's how the demagogue weasel is using his Russian- provided hammer:

Among those trying to ring the alarm bells:

To be clear: the Trump/Putin connection is not a "conspiracy." It's all out in the open, unfolding in public. https://t.co/0oaoSet40M
— Anne Applebaum (@anneapplebaum) July 22, 2016

Beginning to think Trump won't release his tax returns because Putin claims him as a dependent.
— LOLGOP (@LOLGOP) July 22, 2016

The only way there's a Trump SuperPAC primarying people after November is if Putin's paying for it.
— Ross Douthat (@DouthatNYT) July 22, 2016