Republicans and their media enablers have been peddling The Narrative for decades that Hillary Clinton has a "trustworthy" problem: that, well, she lies.  We're willing to postulate that some of this narrative has roots in (1) the hounding of the Clintons by their political opponents and the media for 25 years, and their consequent desire to erect privacy walls to deflect that hounding, (2) the urge to use cautious, niggling, lawyerly language when a simple declaration is in order, and (3) blahblahblah who gives a crap - it's a lazy, phony narrative.

That said, though, the next time someone tells you "Hillary lies" on Facebook, in a conversation, etc., feel free to cite this data from the independent fact- checkers at PolitiFact (click on images to enlarge): 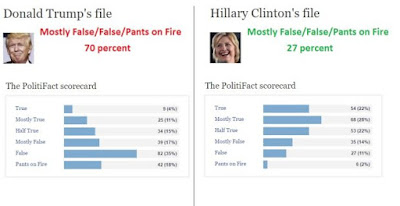 Displayed differently, with other politicians listed dating back to 2007, here's how she compares: 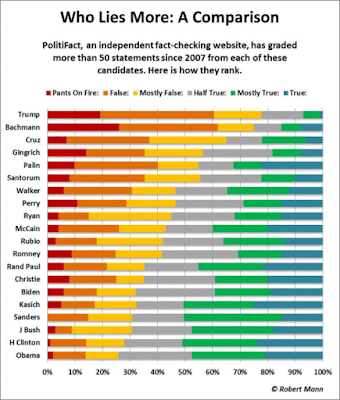