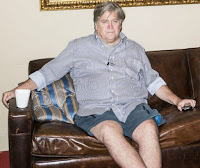 "Tell me with whom you walk, and I will tell you who you are," is the Spanish proverb quoted yesterday by Hillary Clinton in her takedown of neo- fascist useful idiot Donald "Rump" Trump's ties with white supremacist "alt- right" bigots.  Chief among Rump's, um, fellow travelers is Stephen "Bubble Boy" Bannon, former executive at alt - right platform Breitbart.com and current Rump shampaign CEO, whose offenses against society and common decency go beyond his hateful political and racial views:


Stephen K. Bannon, the new CEO of the Donald Trump campaign, was charged with misdemeanor domestic violence, battery and dissuading a witness following an incident in early January 1996, though the case was ultimately dismissed, according to a police report and court documents.

The Santa Monica, Calif., police report says that Bannon’s then-wife claimed he pulled at her neck and wrist during an altercation over their finances, and an officer reported witnessing red marks on her neck and wrist to bolster her account. Bannon also reportedly smashed the phone when she tried to call the police.

But wait, that's not all!


For years, we’ve heard Republicans warn of the gigantic dangers posed by voter fraud, despite the fact that very few such cases have actually been documented.

However, the Guardian has now discovered a potential case of voter fraud that might really live up to the hype — and it involves Donald Trump’s campaign CEO, Stephen Bannon.

According to the Guardian, Bannon “has an active voter registration at the house in Miami-Dade County, Florida, which is vacant and due to be demolished to make way for a new development.” The publication notes that this is an apparent breach in Florida election laws, as it’s illegal to register yourself to vote at an address where you don’t actually live.

“Wilfully submitting false information on a Florida voter registration – or helping someone to do so – is a third-degree felony punishable by up to five years in prison,” the Guardian notes.

(Photo:  Bannon, the flower of White Supremacy.)
Posted by W. Hackwhacker at 10:09 AM