Today's Tomorrow Cartoon - Did You Say Something? 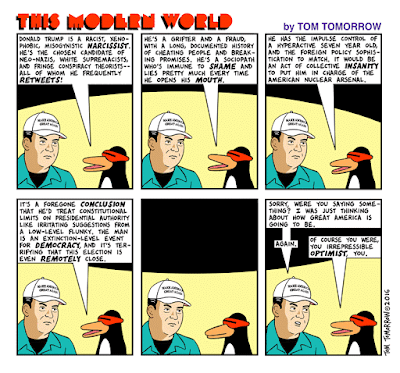 Even with some in the media belatedly beginning to call a liar a liar, and with more and more editorials warning of the existential danger of a neo- fascist demagogue Donald "Rump" Trump presidency, a disturbingly large segment of the population, both Rump supporters and nominal "undecideds" don't seem to be heeding the blaring horns and flashing lights.  Here's why:  These people are "the Republican base," and it's come home for Rump.  In fact very few of these people seem to care if the demagogue lies, or bashes women, the disabled, Muslims, Hispanic and African Americans, etc. They actually thrill to it and seem to want more threats and violence from their weasel-headed hero. That Rump is in this position is, as Charles Pierce ably put it, a reflection of our poor citizenship:


For the balance of this election cycle, and largely due to the presence in it of this ridiculous man and his ridiculous campaign, the American people have proven themselves profoundly unworthy of being called citizens. [snip]

[On the latest scandal] This likely will occasion another spasm of impotent introspection on the part of our elite political media on the topic of, "Why doesn't any of this stick?" But few of the members of that media will dare to look at the real answer, which is that there is a substantial constituency for what Trump has been peddling and that the elite political media has been pandering to that constituency every day since Trump became a genuine phenomenon. The racism is offensive and the economic insecurity is a dodge. Americans are bored with their democracy and they don't have the democratic energy to do anything about it, so they'll settle for an entertaining quasi-strongman. When they decline, democracies get the dictators they deserve. A country mired in apathy and lassitude gets a dictator who can't even put in the hard work of becoming very good at it. (our emphasis)