Hillary Clinton gave neo- fascist toddler Donald "Rump" Trump a thorough beat-down in last night's debate -- and that's not just our opinion.   There's plenty of analysis around that confirms Rump had a gruesome night, and that pinpoints moments when his dark soul was revealed yet again.  For now (we'll have more to share later), here are some of our favorite reactions from the Twitter machine and elsewhere:

Donald Trump has given us the worst debate performance by any major-party nominee since the advent of television.
— Jonathan Allen (@jonallendc) September 27, 2016

Trump's jab at 400-pound guys sitting online in bed may have lost him the alt-right
— Patrick Monahan (@pattymo) September 27, 2016


And then there's this comparison (h/t John Cole, Balloon Juice): 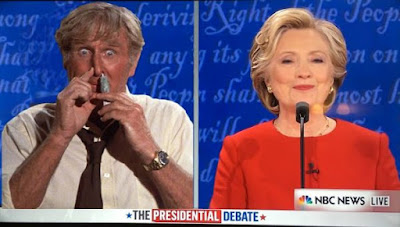 Also, this jab from Seth Meyers:  “Yeah, his head doesn’t have room for facts and figures because it has to hold seven words.”