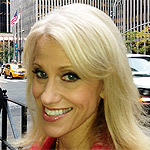 A while back, narcissist and pathological liar Donald "Rump" Trump was playing to the gullible corporate media and the Brooks Brothers wing of his party when he invited former critic and fellow plutocrat Willard "Mittens" Romney to his New Jersey golf club, allegedly for a chat about the Secretary of State position. It was meant to show "no hard feelings" toward Mittens after his refusal to endorse (or reportedly vote) for Rump, and, more importantly, to assure the Rethug "establishment" that Rump was open to working with them in a Rethug  "unity" government.  All seemed to be going according to plan, when former Rump campaign manager and piranha / human hybrid Kellyanne "Con For Short" Conway, in an interview with CNN yesterday, said that Rump's mouthbreathing base would feel "betrayed" if Mittens were to get the post of Secretary of State, among other slights aimed at Mittens.

With Rump trying to assemble his Cabinet of incompetents / dangerous wingnuts, Conway's public airing of her own opinions and agenda undercutting her boss was reportedly not appreciated by a "furious" Rump. Said one unnamed aide to the shitgibbon:


"Instead of driving Donald Trump's message, she's pushing her own agenda. It's dangerous."

Dangerous, especially to Con For Short, who later defensively insisted the reports of Rump's anger were "false" and (this is rich, coming from her) "sexist,"  and boasted that she could have "any job I want." Sounds like Rump's narcissistic personality disorder -- and perhaps delusional behavior -- has rubbed off on someone.

BONUS:  She may or may not be off message again, this morning issuing a vague threat to re- open Rump's campaign promise to pursue Hillary Clinton's imaginary "crimes." These people are the scum of the earth.

(photo: Careful of the bite.)
Posted by Hackwhackers at 11:45 AM

By having several people say several conflicting things, they are able to position themselves on all sides of an issue.

Thanks, Jerry. Now imagine the chaos ensuing once he's handed the keys to the White House. Foreign governments will have no idea what to believe, much less people at home. We're in for some dark days.

I don't go in for the physical appearance insults but that unflattering pic makes Kellyanne look like Tricky Dick Nixon.

Trump world is the ultimate ship of fools that is already foundering. In time it will sink to the bottom of the political sea.

It couldn't happen soon enough for us, Michael.

the pained expression on Rmoneys face really does say it all... as is the author comment.

regardless if he makes SoS in a Trump administration or not, i bet this aint playing well in the Romney house.....

It sounds like to me with all of the sociopaths that Trump(enskin) is appointing that the backstabbing will start real soon.