Trump Has Romney For Dinner


People are having fun with the picture of neo- fascist narcissist Donald "Rump" Trump dining last night on with fellow plutocrat Willard "Mittens" Romney at the Manhattan restaurant Jean-Georges. Willard is purportedly under consideration for Secretary of State, if he agrees to apologize for calling Rump a "fraud" and "phony" and puts his balls in a blind trust (truss?).  Here are two of our favorite tweets:


I made the Trump/Romney photo black and white, and it looks like a Twilight Zone episode where a guy just made a foolish deal with the Devil pic.twitter.com/froiDYDJei
— Adam Murray (@Atom_Murray) November 30, 2016

Just out of view in the cropped picture is Rump's new Chief of Staff Reince "Prepuce" Priebus, who was there to advise Mittens on his personal experience in putting one's balls in a blind trust.

BONUS:  This from Democratic Underground (click on image to enlarge) -- 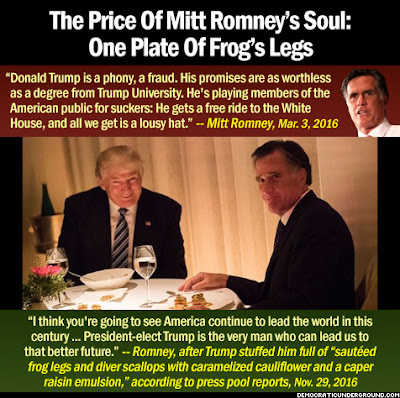