"Get Out Of My Country": Today's Right Wing Violence 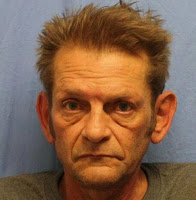 Last night at an Austin Bar and Grill in Olathe, Kansas, two men of Indian origin were shot by an unhinged loon who shouted "get out of my country" at them before brandishing a gun and shooting both men. One of the men later died. Also shot was an onlooker who tried to stop the killer, identified as Adam Purinton of Olathe. The two Indian men are employees of a Garmin facility in that city. Purinton fled the scene and was arrested this morning in Clinton, MO as he drank at a bar, where he told a bartender that he needed a place to hide. He's been charged with one count of murder and two counts of attempted murder.

Purinton likely viewed the two Indian victims as Middle Eastern. There has been a surge in hate crimes against Muslims in the past few months, as the supporters of bigoted demagogue Donald "Rump" Trump feel they now have permission to attack people that are (or may not be) Muslim because of their leader's white nationalist dog whistles to them and refusal to speak out against bigots. Whether it's Rump's Muslim travel ban or his aggressive deportation of undocumented Latinos, people like this miserable lowlife want to pitch in and "help" their leader make America white again.

Labels: Shooter kills man in Kansas after shouting "get out of my country"