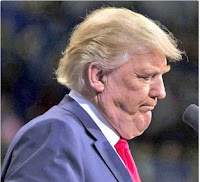 You've heard by now that narcissist and petty authoritarian Donald "Rump" Trump has ducked out of the White House Correspondents' Association Dinner on April 29, marking the first time in 35 years that a President has not appeared. That "decision" follows a period in which Rump has called the press "the enemy of the people," has blasted well-sourced stories about his collusion with Russia during the elections, and has had his press secretary cull out media organizations giving him unfavorable coverage from a recent informal gathering of the press.

Now that Rump's cowardice has opened up a prime slot at the dinner, a campaign to have Rump antagonist and impersonator Alec Baldwin fill in for the thin-skinned Snowflake-In-Chief is beginning.

You know who would also be a great choice to headline the affair and skewer Rump? The guy who did it superbly in 2011.

Posted by Hackwhackers at 10:21 AM

Cluck, cluck, cluck, clukkk. TrumpleTHINskin, you think the press & anyone else for that matter gives a rat's ass if you are there?? You just give them more fodder for their purposes. Oh, Narcissist Hairball In Chief, you are a joke. SAD!
Hey, I'd love to see "That Guy from 2011" show up!! He'd say sumin' like, "I just got this here invite. I guess I'm still on the mailing list!"
Bares repeating: Miss Him!!!!!!

Like all bullies, he shrinks pretty quick when he gets challenged. Do hope they get Baldwin to do his Trump schtick! And Melissa McCarthy, too!