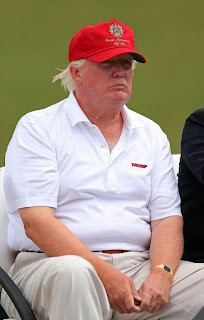 Major league baseball season opens Monday, and a tradition of the President throwing out the first ball dates back to William Howard Taft in 1910. But it appears that orange buffoon Donald "Rump" Trump will sit out the tradition.

Rump's staff originally reached out to the Washington Nationals, and shortly thereafter withdrew their request for him to throw out the first pitch on Monday, citing "schedule conflicts." (Baltimore Orioles Vice President John Angelos had earlier nixed the idea, saying Rump would first have to apologize for some of the statements he's made). We think that conflicts in Rump's schedule of tweeting and watching cable news isn't the real problem: it's that Rump fears being lustily booed. After all, Washington, D.C. and its nearby Maryland and Virginia metropolitan area voted overwhelmingly against the demagogic sociopath. It may also be that Rump may not be able to get the ball over the plate, given his athletic condition (he's used to whacking a small golf ball around a course, and then jumping into a golf cart to follow it).

(photo: No balls, three strikes)
Posted by Hackwhackers at 3:30 PM

My first opinion was the one about the "BOOING". Made sense. He schedules HIS venues around HIS fan base. Then I read sumin' about his 'protecting his arm. Now that was a laugh!
Schedule conflicts. Right. Squeezin' in all those E.O.'s..golf games. Gettin' the ball over the plate, Embarrassment, BAD. This President Ass Hat is a LOSER.
GOOD CALL!!!!!!!!!!!

F.M. -- He'll only show his orange face in controlled settings, where the audience is composed of his cult followers. A stadium full of baseball fans isn't one of them.