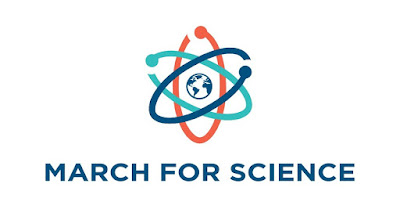 Today, Earth Day 2017, marchers around the globe are calling for support of science and its role in combatting global climate change. Under the "March for Science" banner, thousands of marchers in Washington, D.C. have gathered at the Capitol in preparation for a march to the White House to demand an evidence-based policy toward environmental challenges worldwide. From Sydney to Berlin to London to dozens of cities in the U.S., marchers are hoping to energize people to resist the anti-science positions of neo-fascist sociopath Donald "Rump" Trump who has proposed deep cuts in environmental and earth science programs. One organizer, Dr. Roger Morris of King College London, summed up the worldwide events:


"These marches are brilliant -- a spontaneous, global response led by young scientists empowered by social media, keenly aware of the global challenges that need to be addressed if their world is to have a civilized, sustainable future. Insular populist politics, which have temporarily triumphed in the US and UK, need to be balanced by the broader vision of youth."

With anti-science nationalism spreading in the U.S. and Europe, it's critical that not only the science community but also the general public demonstrate the belief that science plays a vital role in human progress.
Posted by Hackwhackers at 10:49 AM