So Much Winning, Please Stop!

1) Border wall fail. Bigoted loser Donald "Rump" Trump backed away from his threat to put funding for his border wall with Mexico in the continuing resolution, which would have triggered a revolt in Congress and a government shutdown. Rump attempted to cover his tracks with a vague promise that someday, someway, somehow the wall would be built...and Mexico would pay for it, even if we have to pay for it first...er, wait.

2) NAFTA reversal. Last night, the White (Supremacist) House released a statement that, after calls with Mexico's President Enrique Peña Nieto and Canada's Prime Minister Justin Trudeau, Rump would not be pulling out of NAFTA "at this time." Instead, Rump will use his magical negotiating skills which have been so evident in the first 100 days of his administration to get a better deal "for all three countries, his "America First" demagoguery notwithstanding. Reportedly, corporation-owned Rethuglicans pulled the chain on Rump, getting him to back off his empty "termination" threat.

So much winning there. We're certain that his cultish following will rationalize these things somehow as "wins" for Rump in their upside down, inside out alternate reality world because they always manage to reward and to blame the wrong people.

BONUS: Apropos of the Rump cult, the border wall and NAFTA (h/t to Mock Paper Scissors): 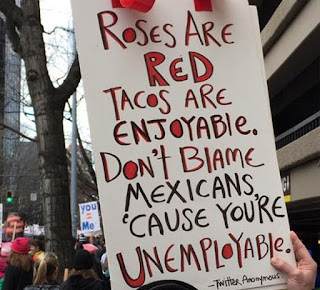 Labels: Trump backs off of wall and NAFTA issues