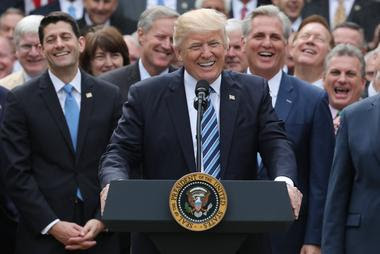 Surprise!  TrumpCare 2.0 is as awful as the one that failed the first time around:

The agency also predicted the deficit would come down by $119 billion over the next decade ― and that premiums for people buying insurance on their own would be relatively lower than those premiums would be if the Affordable Care Act stays in place.

But the reasons health insurance would be less expensive for some aren’t much to cheer about, the budget report makes clear. Prices would come down for healthy people because those who are sick or have illness in their medical histories would have less access to coverage ― and the policies available on the market would tend to be a lot less comprehensive.

In other words, the price for lower premiums would be some combination of higher out-of-pocket costs, fewer covered services, and coverage that would be harder to get for the people who need it most.  [snip]

Most of the money saved by cutting hundreds of billions of dollars from Medicaid and billions more from financial assistance for those buying private health insurance will be transferred to wealthy households and health care companies in the form of tax cuts, with a small amount left over for deficit reduction. (our emphasis)

The House Republican leadership was awaiting the scoring of this bill (misnamed the "American Health Care Act" -- it's really the "American Tax Cuts For The Wealthy And Screw You Act") before formally sending it to the Senate, where a group of 13 Republican white males are already diligently at work on their own approach to afflicting the afflicted. Fortunately, they face a difficult road ahead. Each, in our own way, should make it as difficult as possible.

UPDATE:  Here's the impact on the uninsured rate in graph form (click on images to enlarge) -- 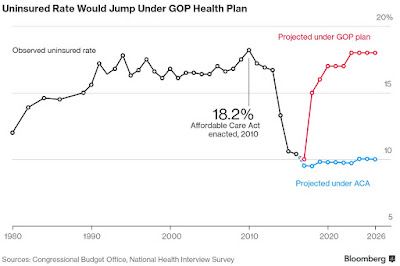 Other goodies from the Republicans -- 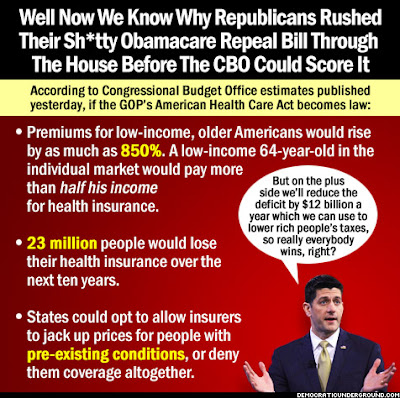 Saw a documentary a couple of years ago about a charity that provided basic healthcare services for a poor, rural, white area in the Tennessee/North Carolina region. If I remember correctly the "event" was held in a stadium with many folks telling an interviewer they had driven hundreds of miles and waited numerous hours in line. While some had jobs none of them said anything about having access to health care. It was shocking to see the condition of these people who were there to receive everything from dental work to limited outpatient surgery. Truthfully, the situation was so bad for many that it went beyond third-world and bordered on medieval.

The only thing sadder than the desperation these folks faced was that a vast majority of them probably scoffed at Obamacare and made matters worse by voting for Trump. Being honest, it's a battle to maintain sympathy for such people who are so self-destructive.

They just had a medical/ dental clinic in our region as well. You're right, this is bordering on medieval, especially in a country as rich as ours. But, as Charles Piece has said, I empathize but don't sympathize with those Trump voters who find themselves in this predicament.