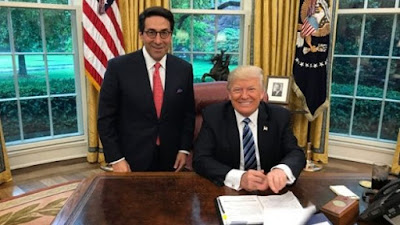 We know that narcissistic con artist Donald "Rump" Trump knows how to run a grift (see Trump University fraud case), albeit badly. So it's not a surprise that his lawyer, double-talking shyster Jay Sekulow, is up to his dyed hair in a grift. It's being reported that Sekulow, a lawyer for the religious right, diverted donations to his "charity" to himself and his family to the tune of $60 million since 2000. Those are some hefty "administrative costs." The "charity", Conservative Advocates Serving Evangelism, offers legal support to right wing groups alleging religious discrimination because they want to discriminate against others. The report indicates that Sekulow's telemarketers pressed low income people to contribute, providing the Sekulow scam with millions of dollars per year in income. According to the report,


"Attorneys and other experts specialising in nonprofit law said the Sekulows risked violating a federal law against nonprofits paying excessive benefits to the people responsible for running them. Sekulow declined to detail how he ensured the payments were reasonable."

Apparently Sekulow's governing belief is that charity begins at home.