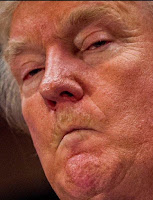 In a break with a decades-old position, the American Psychoanalytic Association (APA) has advised its 3,500 members in an e-mail from their executive committee that they may offer professional opinions on the mental health or stability of political figures, including unhinged sociopath Donald "Rump" Trump. The former position, commonly known as the "Goldwater Rule," prohibited psychiatric professionals from rendering opinions on the mental health of public figures without personally examining them. It was prompted  by right-wing Sen. Barry Goldwater's 1964 campaign for President when some psychiatrists responded to a survey asking whether Goldwater was mentally unfit for the Presidency.

Increasingly, psychiatrists believe they have a "duty to warn" others of a person's mental instability especially if that person represents a threat to the public. Rump's narcissism, paranoia, seething anger, and erratic behavior have concerned many mental health professionals. According to Dr. Leonard Glass, a psychiatrist at Harvard Medical School:


“In the case of Donald Trump, there is an extraordinary abundance of speech and behavior on which one could form a judgment. It’s not definitive, it’s an informed hypothesis, and one we should be able to offer rather than the stunning silence demanded by the Goldwater rule.”

Rump's signs of mental instability have resulted in this association breaking with decades of tradition because they see the danger represented by him. Let's hear from more of them, particularly now as his actions and threats spin out of control and threaten a Constitutional crisis.
Posted by Hackwhackers at 1:00 PM

I was not aware of the Goldwater Rule. However, I always wondered why a Presidential candidate didn't have to go under a physical & mental vetting.(By a non-partisan independent physician) Dumph is a classic case why this NEEDS to be done. Look where we are at now.

F.M. - Most candidates in the recent past release their recent medical records, but this clown wouldn't, providing a "summary" from his very strange "doctor." But the mental piece is even more important than the physical: we can survive a person with high blood pressure, but not one who's mentally unstable and prone to violence.