A Hole In The Wall (That Mexico Will Pay For!) 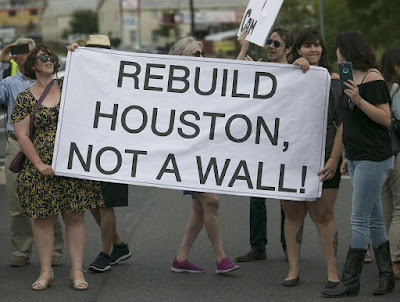 The urgent need to fund Hurricane Harvey relief and recovery might be the last gasp for this coming fiscal year for bigoted narcissist Donald "Rump" Trump's wall on the southern border (that Mexico will pay for!).  Congress is facing deadlines not only for the 2017 spending bill but for an increase in the debt ceiling, which may be coupled with the 2017 bill / continuing resolution and hurricane relief. That added expense would give Rethuglicans an excuse for not providing funding for the wall (that Mexico will pay for!), despite Rump's threat to shut down the Government. Additionally, any refusal to increase the debt ceiling would tank the markets quickly.

Rump is certainly unhinged enough to veto the bill, but Congress would easily override his veto, and have the excuse of needing those funds for states impacted by Harvey. It's also interesting that a leader in the far right, so-called "Freedom Caucus" Rep. Mark "Sheep In The" Meadows is blowing cold on Rump's dream:


“In talking to a number of my members, if there was a vote for a continuing resolution next week that did not include border wall funding,” Meadows told ABC News, “the majority of those members would be supportive of that.”

Will Rump propose a separate supplemental funding bill for the wall (etc., etc.)? Probably, but there appears to be growing skepticism that he'll get anything beyond token funding.
Posted by Hackwhackers at 2:45 PM