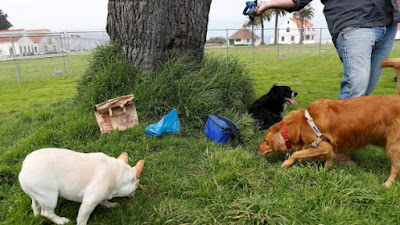 We noted yesterday that white supremacist rallies are popping up around the country, in support of neo-fascist demagogue Donald "Rump" Trump's clear signals that they're "very fine people." A rally was scheduled today in San Francisco's Crissy Field by a group of thugs calling themselves "Patriot Prayer", but had to be cancelled after the right-wingers expressed fear for their safety (they'd be greatly outnumbered by counter protesters). It's more likely, though, that they were dissuaded by a more organic "safety" reason: many dozens of local residents have been taking their dogs to Crissy Field, the site of the rally, and allowing them to poop there with no clean up. Now, that's fighting dog poop with dog poop.