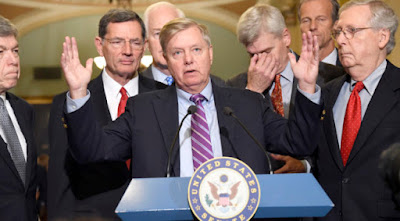 For all of you who called, wrote, demonstrated, etc., now we think it's time to take a bow (until the next time they go after the Affordable Care Act and we have to go to work again!):


The Senate will not vote on the Graham-Cassidy bill to repeal Obamacare, Majority Leader Mitch McConnell told Republicans in a closed-door meeting, three sources told CNN.

We've put it to rest for now, but come January, we'll still have 10 months before we kick these scumbags out. They'll keep bringing it up in different ways, so we need to be alert, Hackie.

Yes. They'll try to sneak something in somewhere just to say "look we passed something!"