Earlier today (U.S. Eastern time), the Cassini spacecraft completed its long, remarkable mission, entering and burning up in the atmosphere of Saturn in a "Grand Finale."

Here's the last picture received from Cassini before it went dark (click on image to enlarge): 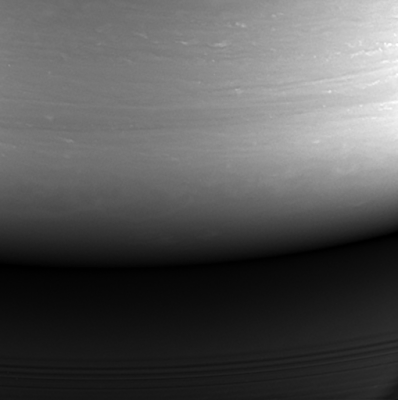 
It’s grainy. It’s raw. It’s monochrome. And, yet, it’s a powerful image. It shows Saturn’s night side, lit by reflected light from the rings, and shows the location at which the spacecraft would enter the planet’s atmosphere.

This is the last image taken by the cameras aboard NASA’s awe-inspiring Cassini. Hours later, the spacecraft began descending into Saturn’s thick atmosphere, traveling at 12 kilometers per second (7.5 miles per second) and was turned to ashes.

Over 13 years of operation, the spacecraft has traveled 2 billion kilometers of orbits around Saturn and its moons. It has sent back more than 450,000 images, and for quite some time these will be the last close-up images of Saturn we will have until another mission returns to the ringed planet...

There are more images from Cassini in recent days at the Quartz link above.

Congratulations to any and all who had a part in this significant, impressive achievement.
Posted by W. Hackwhacker at 9:37 AM