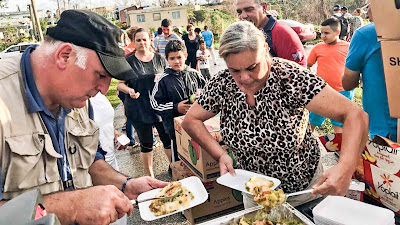 A month ago, world-famous chef José Andrés flew to Puerto Rico and organized a team of chefs, cooks, culinary students and others to help feed victims of Hurricane Maria. His "World Central Kitchen" organization has now served almost 2 million meals to residents of the ravaged island.

He set up a network of 18 kitchens around the island, feeding more American citizens than any other organization, including the American Red Cross. As grocery stores, food vendors and restaurants have started to open, Andrés is scaling back his operations so as not to undercut their businesses, and rather is going to refocus more on feeding people in more remote areas, the sick and the elderly.

Andrés made news in 2015 when he backed out of opening a restaurant in bigot Donald "Rump" Trump's new hotel in Washington, after Rump referred to Mexican immigrants as "rapists" and "criminals." Being the lowlife that he is, Rump sued, and the case was settled out of court.

A true hero for our time.