"A Full-Scale Looting Of America"

Regardless of the forthcoming attempts by Republican liars and looters to "sell" it, their disastrous wealthfare tax bill (a.k.a., the "No Billionaire Left Behind Bill") is an unprecedented redistribution of the nation's wealth upward. This chart shows what the Republican wealthfare bill does for income inequality over the coming decade: 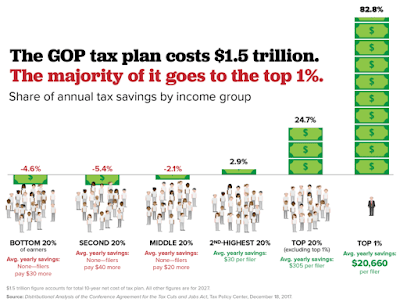 Not only the substance, but the "process" employed in the passage of this sociopathic legislation is an assault on democracy, as Niskanen Center vice president Wil Wilkinson explains (h/t dear friend P.E.C.):


In its great haste, the “world’s greatest deliberative body” held no hearings or debate on tax reform. The Senate’s Republicans made sloppy math mistakes, crossed out and rewrote whole sections of the bill by hand at the 11th hour and forced a vote on it before anyone could conceivably read it.

The link between the heedlessly negligent style and anti-redistributive substance of recent Republican lawmaking is easy to overlook. The key is the libertarian idea, woven into the right’s ideological DNA, that redistribution is the exploitation of the “makers” by the “takers.” It immediately follows that democracy, which enables and legitimizes this exploitation, is itself an engine of injustice. As the novelist Ayn Rand put it, under democracy “one’s work, one’s property, one’s mind, and one’s life are at the mercy of any gang that may muster the vote of a majority.” (our emphasis)

Can't you just picture Ayn Rand disciple and Sneaker of the House Paul "Lyin'" Ryan, "Millionaire Mitt" Romney and any number of other Republican "makers" when you read that?

Matthew Yglesias reiterates that we're witnessing "the full- scale looting of America" in this bill and in other actions by Republicans:


Over the course of 2017, both in Congress and in the executive branch, we have watched the task of government devolve into the full-scale looting of America.

Politicians are making decisions to enrich their donors — and at times themselves personally — with a reckless disregard for any kind of objective policy analysis or consideration of public opinion.

A businessman president who promised — repeatedly — that he would not personally benefit from his own tax proposals is poised to sign into law a bill that’s full of provisions that benefit him and his family. Congressional Republicans who spent years insisting that “dynamic scoring” would capture the deficit-reducing power of tax cuts are now plowing ahead with a bill so fast that they don’t have time to get one done, because it turns out they can’t be bothered to meet their own targets.

Meanwhile, in the background an incredible flurry of regulatory activity is happening out of public view — much of it contrary to free market principles but all of it lucrative for big business and Trump cronies. (our emphasis)

We need to have this moment burned into our consciousness, along with every other moment that's passed and will pass between last January and next November. These are objectively evil people, and we need to chase them out of public life, period.
Posted by W. Hackwhacker at 10:30 AM