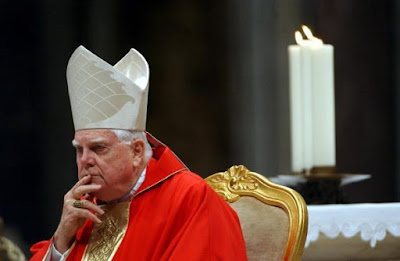 The Vatican announced this morning that the disgraced former Archbishop of Boston, Cardinal Bernard Law, has died. Law was the central figure in the pedophile priest scandal that first engulfed the Catholic Church 15 years ago, and was responsible for covering up the scandal in his archdiocese. Law initially dismissed the allegations, while he reassigned priests to other parishes without informing them or the police. When he resigned that position,  he was recalled to the Vatican, where he served in policy-making committees, including the powerful Congregation for Bishops, which has the responsibility for recommending clergy for promotion to the Pontiff. He retained his lofty status as Cardinal, despite his gross misdeeds, as if nothing happened:


"He seemed to escape any scrutiny or punishment by the church for his well-known crimes, and instead remained part of the Vatican elite under John Paul II, Pope Benedict XVI and Pope Francis, enjoying celebrity status that is akin to a clerical club membership bestowed on all top cardinals in Rome. He was often spotted dining with high-ranking cardinals at Rome’s better restaurants."

The damage that Law did to the lives of abused children and their families in his archdiocese and beyond is staggering. He belonged behind bars. The fact that the Church later provided a place of honor for him in Rome is a signal that the Church hasn't learned its lesson, and may never.

BONUS:  As Infidel notes in the comments, Law is but one of many, many high- ranking Church officials who are part of this shameless history, that continues today.

Well, naturally. It would be nice if this issue were just a matter of one bad cardinal, but Law is hardly the only person to have carried out these policies. Years ago the Dallas Morning News did an exhaustive report on the 178 Catholic bishops and archbishops in the US, and concluded that 111 of them (about two-thirds) were involved in cover-ups of child-molestation cases. More to the point, the same pattern of cover-ups and moving molesting priests around to shield them from the authorities has been seen in the Catholic Church in countries all over the world for years. There's anecdotal evidence going back centuries that priests had a reputation for child molesting.

The Catholic Church as an institution is irredeemably rotten right down to its very roots.

Infidel -- The case of Bernard Law just scratches the surface, as you point out. So much evil and treachery, and it continues to this day, albeit quieter.