They're Laughing At Us, Not With Us 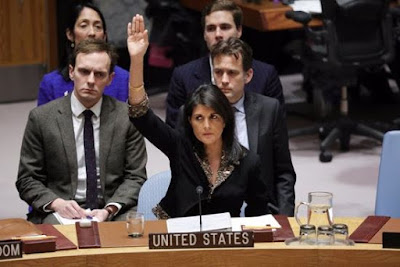 Dimwit Donald "Rump" Trump's dimwit Ambassador to the United Nations and the pride of South Carolina's edumacational system, Nikki Haley (whose prior international experience consisted of sampling the Rooty Tooty Fresh 'n Fruity offerings at Charleston's International House of Pancakes), followed up her asinine "taking names" warning with ... being pranked by a couple of Russian comedians, one posing as the Polish prime minister. Do we laugh or cry?

One of the lowlights:


The pranksters also managed to convince Haley that a nonexistent island called Binomo was recently targeted by Russia during its nonexistent elections.

“You know Binomo?” the comedians asked.

“They had elections and we suppose Russians had its intervention,” they replied.

“Yes, of course they did, absolutely,” Haley said before offering to “find out exactly what our stance is on that, and what if anything the U.S. is doing or thinks should be done and I will report back to you on that as well.”

“We’re supposed to have White House meetings on all issues with the South China Sea coming forward, so I think we’ll have more answers at that time,” Haley added.

"Binomo."  We believe that borders on "Dumbassistan."

Here's the full recording so you can hear the credulous ignoramus in full:

(Photo: That steely look of resolve. That stinkeye directed at friend and foe alike. That wind whistling through her ears. Takin' names! That's Winning!)
Posted by W. Hackwhacker at 2:00 PM

Where does one begin to address the idiocy of this administration?

I thought I was watching an episode of Seinfeld when the Nikster warned the adults in the room about taking names. Who the f*** does this and expects to be respected?

The latest punking of the Nikster doesn't surprise me. She's on a crusade to start WW3. Sad thing is, nothing shames this demented power-crazed idiot or her boss.

I expect in the future one or more of our former allies will have to put the brakes on us from destroying the world. I wouldn't blame them either.

You know those days when you just want to go back to bed and pull the goddamn blanket over your head? That was one of them. Every day we're humiliated and embarrassed on the world stage, and every day we shame ourselves.

We have to keep fighting and reminding everyone how important November elections will be.

Anonymous & Diva - I can't remember any other time in my life, or in our history for that matter, when such a collection of corrupt, incompetent, backward, intellectually and morally unfit shitstains were running our government. If that reality can be imprinted on the majority of our fellow citizens for a generation or two, we might be able to get back to where we were before this all started.

Binomo is just off the coast of Nambia. Its chief export is the binomial theorem.

I don't have a link for this, but a few years ago I read about a guy who made a fake but convincing passport from the "Republic of Amnesia" and was actually able to travel with it several times. He was never challenged. If Haley had met him I'm sure she wouldn't have remembered that there is no such country as Amnesia.

I hope these pranks continue. As long as the administration is "taking names", let the pranksters supply them. Trump can impose economic sanctions on Mordor, Narnia, Arendelle, etc. and the base will roar approval. Everyone will be happy.

Infidel - we endorse the idea that these pranks continue. To the extent these Stormtrumpers heads are filled only with fake news, false narratives, and phony grievances, a few made-up nations needing to have their names taken would fit in there rather nicely!