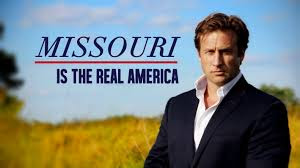 The Republicans are sure cranking out some strange excuses for male candidates in the "heartland" of Missouri (or are they?).

We all remember failed 2012 Senate candidate Todd "Legitimate Rape" Akin, right? He's the not- OB/GYN genius who, when asked if a pregnancy caused by rape should be allowed to be aborted, mansplained as follows:


From what I understand from doctors, that’s really rare. If it’s a legitimate rape, the female body has ways to try to shut that whole thing down. But let’s assume that maybe that didn’t work or something. I think there should be some punishment. But the punishment ought to be of the rapist, and not attacking the child.

It was bye-bye "Dr." Todd after that.

More recently, there's Stormtrumpin' Republican governor and (former) rising star Eric Greitens, the family values guy who had an affair, then (allegedly!) tried to blackmail his paramour to keep her quiet.  Thoughts and prayers to Eric as his career goes down in flames.

Today, we hear of another Republican, Courtland "Yikes!" Sykes, who is following in Akin's footsteps, ostensibly running for the Senate against Claire McCaskill. So, what dumbass thing did Courtland pull out of his manly heinie to earn our attention?

In a statement posted to Facebook on Tuesday, Sykes said that he had been asked if he “supports women’s rights.”

“I want to come home to a home cooked dinner every night at six,” Sykes said, referring to demands he makes of his girlfriend. “One that she fixes and one that I expect one day to have daughters learn to fix after they become traditional homemakers and family wives.”

According to Sykes, feminists push an agenda that they “made up to suit their own nasty snake-filled heads.”  (our emphasis)

Apparently, he's picked up the local male Republican culture pretty rapidly, since he's only been a Missouri resident for about a year, having slipped over the border from Arkansas (have they no border security?). He's also a big supporter of Donald "Rump" Trump (and Roy Moore and Steve Bannon!). His girlfriend also presents herself as an anti- Hillary screecher.  So, in summary, they deserve each other.

Now some are holding out the possibility that Yikes is one of the greatest political performance artists of this era, the Borat of the 2018 election cycle. His persona and "beliefs" certainly cry out "You've got to be kidding me!" (But then, when you consider the base to whom he's pitching his campaign/ act, you have to think, he's really hitting some of their sweet spots with those rants.) Some lesser "performance artists" like proto- candidate Robert "Kid Rock" Richie used a teased run for office only to later admit it was a publicity stunt to sell swag; of course, still others use runs to raise their profile and/ or to raise money for a particular agenda.  What Yikes turns out to be (other than a failure as a candidate or a magnificent performance artist) is really not going to be important in the long run.

But, either way -- over- compensating candidate or wily performance artist -- Yikes is performing a public service by accurately representing the misogynist views of much of the leadership and the base of the Republican Party, reminding us all over again why we need to defeat them every time and everywhere.

BONUS:  Add to the mix this shot of Yikes with his girlfriend and Steve Bannon (via Crooks & Liars) - 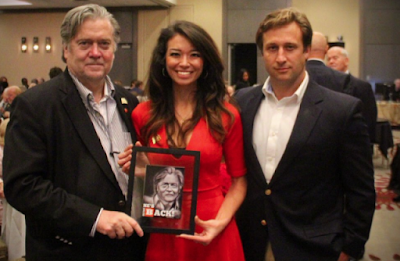 Sykes is an idiotic dick, whether he's blowing smoke and trying to be funny, or he's seriously saying a woman's place is in the home, cooking his freaking dinner. He's sending human and women's rights back to the Stone Age, where most Republicans would like us to be.

donnah - My guess is that, because he's peak nitwit, he's the real (Republican) deal. Very damaged.

Well, he can kiss the snake-filled feminist vote goodbye.

What's astonishing here is not just the primitive attitudes and intemperate language, but the poor judgment to express them in public, and in a written statement yet. Either he has no clue what this would sound like to people in the modern world, or he has no impulse control at all. There are probably more people who think like him than we realize, but most of them have enough sense not to talk about it too openly -- even when they're not running for office.

What the hell is in the water in Missouri?