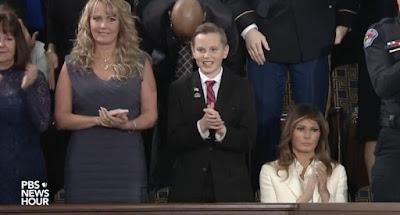 
“In America we know that faith and family, not government and bureaucracy are the the center of American life. The motto is: In god we trust.” (emphasis added)

Labels: Melania Trump declines to stand when Trump talks about faith and family in SOTU, pic of the day

She made her choices, she lives with them. It's unfortunate that Barron will suffer as a result of a loveless marriage, but he'll have The Best Things money can buy. Melania probably won't be allowed to file for divorce while Trump's in office, so we can expect more pouty-faces in the future.

Sorry, no tears to spare.

donnah -- She made her (separate) bed(room), now she has to lie in it.